Home » Sports » Jones, Carey and Stoughton Win in Day Action at Roar of the Rings

Jones, Carey and Stoughton Win in Day Action at Roar of the Rings 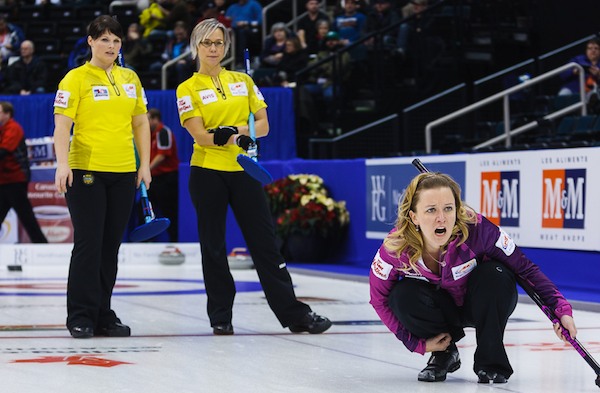 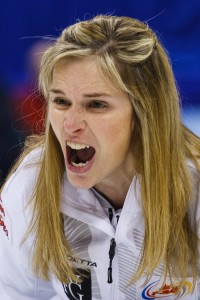 Chelsea Carey Fort Rouge CC) is tied with two other teams at 3-2 after beating Renee Sonnenberg 6-4.

Leading 3-2 in the seventh end, Jones scored three in that end to take command of the game.

“We were in a little bit more control today,” she said. “The girls played great and we’re feeling really good with the ice. We’re getting closer to playoffs and I feel like we’re grinding it out a little bit. We’ve got some intensity and we’ve just got to keep that going.”

Jones feels her crew is peaking at the right moment.

“I felt we were sharp and made shots when we had to, so that was key. If you can get better each game, that looks good for the end of the week. That’s usually our goal and so far, so good.”

Carey, meanwhile, won a dog fight over Sonnenberg, exchanging leads and points throughout the contest before a steal of one in the 10th end gave Carey the win.

“I feel exhausted,” Carey joked at the end of the game. “That was a scary one. Thank God we came out on the right side of that one.”

Like Jones, Carey said her team is curling well.

“We’re in a good spot,” she said. “We said we had to come out and win two games today, so we’ve got one down. We control our own destiny. Hopefully we play a little sharper in the later game. Just got to come out and make shots.”

Stoughton scored three in the fourth end and added four in the seventh end to coast to his eight-end victory. Koe, who remains winless at 0-5, struggled throughout the contest with Stoughton.

McEwen’s match was tighter than Stoughton’s. McEwen trailed on four different occasions, only to tie the game each of those four times. Howard made a draw to the button on his last rock to gain the one-point win.

The loss put McEwen in a tie with Stoughton and Howard, all of whom sport 2-3 records.

“We still have a shot at third place,” McEwen said after the contest. “We don’t totally control our destiny… but we’re not out.”

Brad Jacobs and Kevin Martin continue to roll at the roar, as both remain perfect at 5-0. Jacobs beat John Morris 8-6 and Martin beat John Epping 9-5.