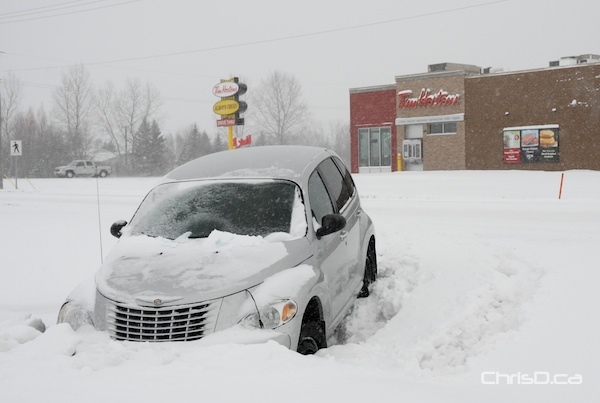 A vehicle sits idle in a ditch in Oakbank, Manitoba on Wednesday, December 4, 2013. (TED GRANT / CHRISD.CA)

City of Winnipeg plows will hit the streets at 7 p.m. tonight to clear main routes, bus routes and collector streets.

As a result, a snow route parking ban will be in effect at midnight. Vehicles parked in violation of the ban will receive a $100 ticket and may be towed.

Sanding operations will also continue throughout the evening and overnight.

The ban prohibits parking on streets designated as snow routes between midnight and 7 a.m., and will remain in place until the city advises otherwise.

Approximately 300 pieces of heavy equipment will be utilized for the plow operation as Winnipeg prepares for up to 25 cm of snow into Thursday.