Carey Moves to Tie-Breaker, McEwen Still Alive at Roar of the Rings 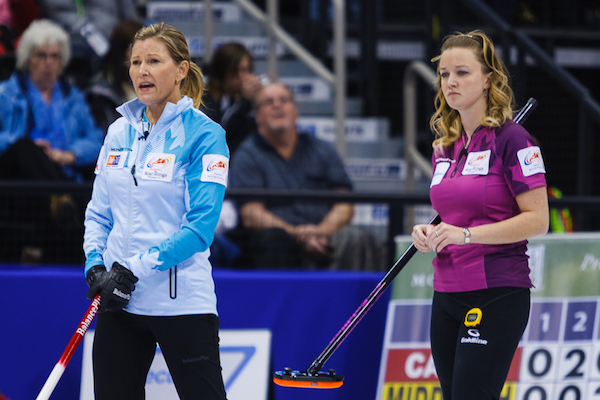 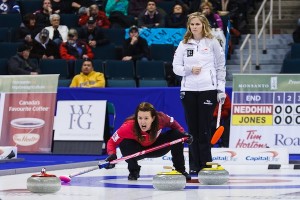 The winner of that game will move on to the semifinal against Rachel Homan.

Carey’s loss was a difficult one, as a win would have ensured her team a berth in the semifinals. A picked rock on her last shot in the ninth end prevented her from forcing Middaugh to draw for one, which would have given Carey the hammer coming home.

“We just didn’t make enough shots,” Carey said. “I missed a couple of bad shots… We just can’t be sloppy against these teams and expect to win the game.”

Carey put things in perspective, though, after the defeat.

“That’s a bad loss but we were guaranteed a tie-breaker either way,” she said. “If you had told us at the start of the week that we’d have a tie-breaker, we’d take it.”

Jennifer Jones (St. Vital CC) beat Heather Nedohin 6-5 to move to 6-1 in the standings and to crush Nedohin’s Olympic dreams. Jones will play in Saturday night’s final against the eventual winner of the semis. 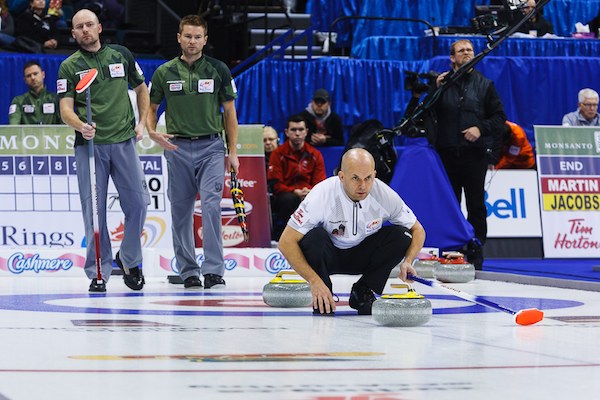 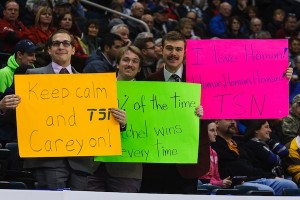 Fans hold up signs in the stands at the 2013 Tim Hortons Roar of the Rings at MTS Centre. (SHAWN COATES / CHRISD.CA)

McEwen scored four in the third end and three in the eighth end to lock down the win. His win officially eliminates Stoughton from the playoffs.

At 3-3 the McEwen team is still in the hunt for a trip to Sochi, Russia and the 2014 Olympic Winter Games. He must now beat Kevin Koe in the Friday morning draw and have Toronto’s John Morris lose in his game with Martin to force a tie-breaker Friday afternoon.

Koe got his first win of the trials by beating Glenn Howard 7-6. Morris beat John Epping 7-6.