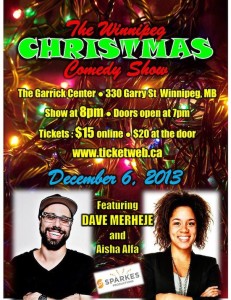 Held at the Garrick Centre, the Toronto comic is a frequent guest on George Stromboulopolos’ guest panel on CBC, as well as MTV.

Winnipeg comic Aisha Alfa will open the show, while Ben Walker (aka “The Old Ball Coach”) will handle hosting duties for the evening.

Tickets are $15 through Ticketweb.ca. A limited number of tickets will be sold at the door for $20.

Doors open at 7 p.m. with the show getting underway at 8 p.m.