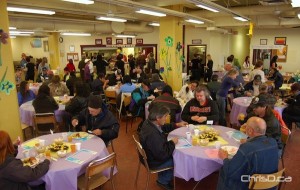 Manitoba Bison athletes aren’t in action over the holiday break, but they’re still keeping active in the community.

For the ninth year in a row, Bison Sports is helping out at Siloam Mission from December 9-13.

Athletes are serving the shelter’s clients twice daily with breakfast and lunch. Bison track and field and women’s soccer will be on hand today, followed by men’s volleyball, football, women’s hockey, T&F and swimming on Tuesday. On Wednesday, men’s hockey, women’s hockey and swimming will be at Siloam, while women’s basketball and men’s basketball will complete the week on Friday. Women’s volleyball will be involved in the kitchen and help out with donation sorting.

Former Bison women’s volleyball player Lindsay Poggemiller-Smith began the initiative in 2005, extending her existing volunteer role to her peers. She continues to be a staff member at the shelter to this day.

Siloam Mission provides more than 8,000 meals per week, and assists in transitioning homeless and disadvantaged people to more self-sufficient and healthier lifestyles.