An artist’s rendering of the future Transcona Aquatics Park (HANDOUT) 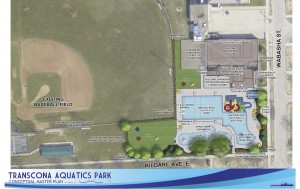 A new aquatics park is in the works for the Transcona Centennial Pool — part of a $5.7 million investment by the city.

It’s been nearly 50 years since the pool has seen major upgrades. Construction will see a brand new outdoor pool with an accessible beach-style entry. Other features include multiple outdoor water slides and an upgraded spray pad.

Clerestory windows will provide for more natural light in the indoor pool area, while new fencing, decking and landscaping round out the upgrades.

The design and final features of the aquatics park were a result of extensive community consultations which began in June 2010.

Construction will begin next spring with an expected opening for summer 2014.