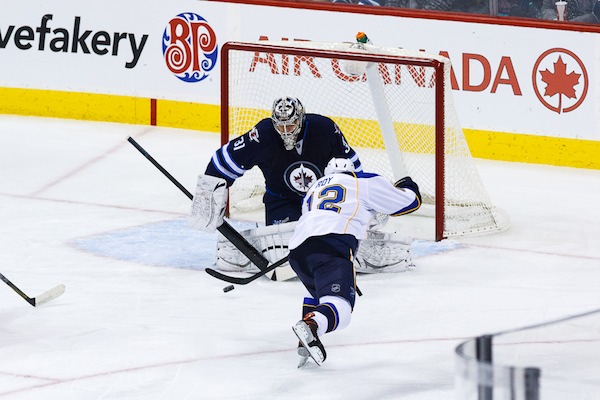 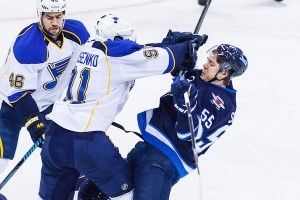 WINNIPEG — In professional sports, sometimes the bounces just go the other way regardless of how a team plays. And Monday night the Winnipeg Jets fell victim to a couple of ill-timed and unfortunate bounces, losing 2-1 to the St. Louis Blues at MTS Centre.

“It’s disappointing just because we worked to get back in the game and tied it up, and then they get one that bounces off a couple things and goes in right at the end of the game. To lose that way is definitely frustrating,” said Winnipeg’s leading scorer Bryan Little, who tied the game on the power play three minutes into the third with his 13th of the year.

St. Louis scored the go-ahead marker with the man-advantage with 3:02 remaining in the game, as Little sprawled to block a point shot.

“I was trying to get in the way,” told Little of Kevin Shattenkirk‘s game winner. “It hit my stick and it might have hit something else. It’s too bad because our penalty kill was pretty good tonight.”

“I thought we played a pretty good game other than the fact that we didn’t finish the game the right way,” said Jets head coach Claude Noel, in what may be his shortest post-game media session at MTS Centre this season. “They end up scoring a seeing-eye power play goal. What can you do?”

Winnipeg held St. Louis to just a pair of shots on goal in the first period, then only eight in the second before Winnipeg-born sniper Alexander Steen banked his 21st goal of the season from behind the goal line and off Ondrej Pavelec‘s back and into the Jets net.

It was a strategically defensive go between two bench bosses — Ken Hitchcock and Claude Noel — who have a history of coaching together.

“I think you have to understand your opponent. That’s the first thing. And understand that’s the kind of game you’ve got to play… I thought we played a pretty smart game,” added Noel. “(It) was a game that was a chess match played game. Both teams were being patient and playing kind of the same way.”

“It ends up kind of being a chess match, but I didn’t think they had a whole lot other than those two lucky bounces.”

The Jets continue their three-game home stretch with two more games against Central Division opponents — the Colorado Avalanche on Thursday night and the Minnesota Wild on Saturday afternoon.