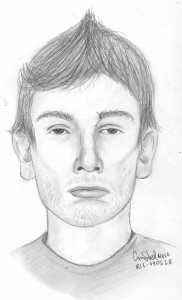 Winnipeg police are hopeful a sketch they released Wednesday might lead them to Bobby Thomson.

Robert ‘Bobby’ Thomson went missing on July 21, 2012 after he was seen in the Osborne Liquor Mart in the company of a man and a woman. Police have put together a composite sketch of the man.

Police first asked for help finding Thomson in September, and then again in November when they released more information, and his father made an emotional plea for information about his missing son.

The man in the sketch is described as a white male, between 5’10” and 6″ tall, dark-coloured eyes with a muscular build and dark hair. His hair may be spiked on top.