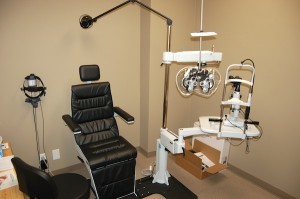 Siloam Mission has opened this optometry clinic at its downtown Winnipeg shelter to help the city’s homeless population suffering from poor eyesight. (HANDOUT)

Floyd Perras, Siloam Mission’s executive director, said staff and patrons had to flee to the cold when the fire alarms went off at 9 a.m. Thursday. Firefighters found a frozen sprinkler head in the Saul Sair Health Centre that caused extensive water damage. The water then leaked into the basement, destroying medical supplies, food and clothing.

“Hopefully we will know soon if or how much of our food and donated items have been damaged by this” said Perras. “The sprinkler head gave way though we are still investigating the cause and the extent of damage.”

Patrons and staff were able to wait in the shelter’s temporary location on Stanley Street, but the health care centre and the clothing room has been closed indefinitely. Perras said the shelter may face extensive renovations due to water damage.

Donations to the shelter can be made online at Siloam.ca.