Home » Sports » Home Ice Not So Friendly for the Winnipeg Jets

Home Ice Not So Friendly for the Winnipeg Jets 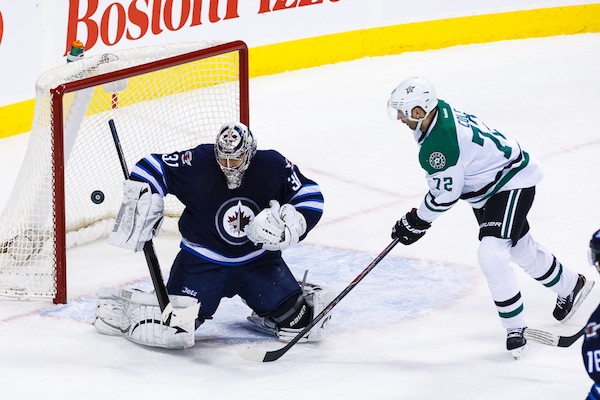 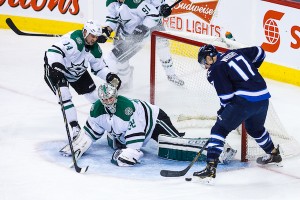 WINNIPEG — It is a widely-held belief across the National Hockey League that Winnipeg’s MTS Centre is one of the loudest buildings to play in despite the diminutive size of the 15,004 who occupy it for Winnipeg Jets home games. But the Jets can’t seem to take advantage of this so-called “home ice advantage,” dropping their sixth game in a row at MTS Centre 6-4 to the Dallas Stars on Saturday afternoon.

“The game was disappointing,” said Jets head coach Claude Noel. “Not only the result. The result is another thing aside, but I didn’t think we played a very intelligent game.”

“It was a game that we chased. We got back in the game I think three times, and then three times they scored right after that, within five minutes. It was a tough one — tough home stand for us.”

Dallas did indeed regain the lead three times after Winnipeg was able to find an equalizer. 4:12 after Matt Halischuk opened the scoring for the Jets, Stars rookie Valeri Nichushkin made it 2-1. 48 seconds after Blake Wheeler made it 2-2, Stars captain Jamie Benn put Dallas back in front 3-2. And 2:53 after Wheeler tied it up again with his second goal of the period, Benn struck for a second time to make it 4-3.

Tyler Seguin, who has become a Jet-killer at MTS Centre this year, scored the eventual game-winner late in the second period to make it 5-3. Seguin finished the game with two goals and two assists — the same stat line he put up in Winnipeg on October 11 where he also scored the game-winner in a 4-1 Dallas victory.

“What I say doesn’t matter,” said Wheeler post game. “It’s what you do out on the ice. And you can blow smoke as much as you want in the media. We’ve been blowing smoke for three years. Everyone.”

“We had a chance to win this game, and then you end up going to the third (period) down 5-3 and you’re doing things maybe out of the system trying to make things happen,” said Jets captain Andrew Ladd. “Then the game gets away from you even more.”

“Obviously something needs to change.”

Winnipeg’s home record falls to 7-8-4, going without a victory at MTS Centre since November 15. Their 14-15-5 record overall has them firmly in last place in the Central Division.

The Jets now travel to Ohio to face the Columbus Blue Jackets on Monday before heading to Buffalo for a Tuesday night matchup with the Sabres to wrap a quick two-game roadie.