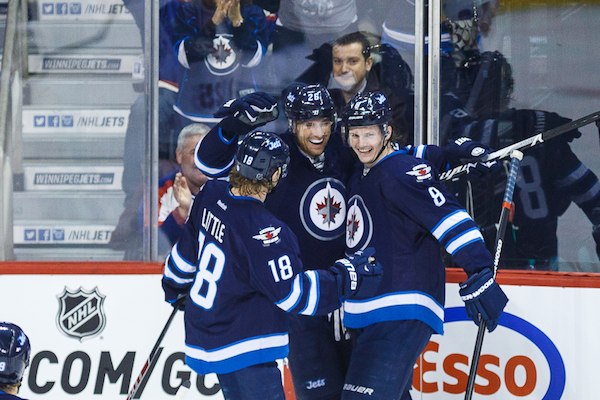 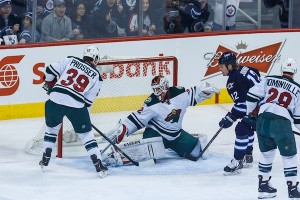 WINNIPEG — After a short Christmas break, the Winnipeg Jets were back on the MTS Centre ice Friday night and gave their fans the gift of a wild 6-4 win over the Minnesota Wild.

After losing six straight at home, Winnipeg has now won the last two, and ended a three game losing streak to divisional rival Minnesota this season. With the win, the Jets move to 17-18-5, while Minnesota falls to 20-15-5.

Winnipeg was led by the fiery hot Blake Wheeler, who had two goals on the night, one of which the eventual game-winner. Wheeler has been enjoying December, now with nine goals in his last 12 games.

“I think confidence plays into it, when the puck starts going into the net you start finding yourself in the scoring areas more and more… It’s tough to score goals in this league when you’re not in those tougher areas,” said Wheeler.

“When [Wheeler] skates and he’s involved physically, I think you can see some of the good things he can do,” said Jets head coach Claude Noel.

Of the combined ten goals on the night, seven came in a back-and-forth screamer of a first period. Minnesota’s Dany Heatley opened the scoring at 2:13, receiving a Jason Pominville pass across the ice for an easy one. A minute later, the Jets answered shorthanded, as Evander Kane notched his eleventh of the year, snapping a top-shelfer after a Wild turnover.

Two minutes passed before the scoring continued, when Olli Jokinen received a no-look Devin Setoguchi pass in front of the net for his ninth. The Wild quickly answered within a minute, as Justin Fontaine cleaned up a mess in front of Ondrej Pavelec to tie the game at two. Not finished, though, Minnesota scored just ten seconds after. Coming off the centre ice face-off, Stephane Veilleux came right down the middle to put another past Pavelec, who went to the bench as the Wild went up 3-2.

“It wasn’t our style in the first 11 minutes. When the game showed itself like that, I thought that’s just the typical three-day-off, after-Christmas type of game,” said Noel. “I can’t completely blame Ondrej for this game. Sometimes you replace your goalie for different reasons, sometimes it’s for the sake that your team needs to wake up and I think it was clearly a message to our group that we need to get on top of this thing.”

Al Montoya entered the game, and the Jets did indeed get on top of the Wild. At the 14:51 mark of the first, Wheeler redirected a Jacob Trouba blue-liner to tie the game. Three minutes after, Dustin Byfuglien stuck with a break-in despite whiffing on a one-timer, knocking in a rebound to put Winnipeg up 4-3.

The game settled down after the first intermission, but the Wild were still able to knot things up on the power play — a beautiful tic-tac-toe display ended up on the stick of Mikku Koivu, who scored his eighth. Winnipeg responded again, though, as the third period saw solid play from Montoya, who finished with 23 saves, and good team defence, with Minnesota kept to the outside. At 10:40, Wheeler got his second on a scrum in front of the net. In the dying moments, Tobias Enstrom put in an empty-netter to give the game its final score.

“We know it’s one game, one win… those early goals can be deflating but the best part about it was finding a way back. We went from there and were able to answer again and again, which you have to like,” said Jets captain Andrew Ladd.

Mark Stuart was held out of the lineup with what was assessed as a lower-body ailment. For Minnesota, Zach Parise did not make the trip to Winnipeg due to injury.

The Jets finish the 2013 calendar year on the road Sunday night against Colorado, then are back at the MTS Centre on Tuesday against Atlantic Division bottom-dwellers Buffalo.