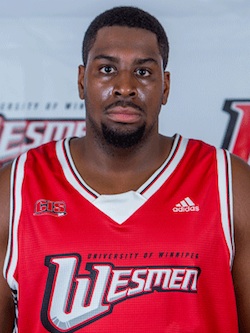 University of Winnipeg Wesmen basketball player Seaton George is out of action indefinitely after tearing his ACL last weekend.

George was playing in the Wesmen Classic against the crosstown rival Manitoba Bisons when he attempted a dunk during a halftime contest.

Video of the injury, which happened December 29, was first published by the website HoopsRant.com.

The 6’6″ forward from Toronto was attempting his second dunk when the injury occurred. George was wearing a tracksuit at the time and planted his right foot on the court before wiping out and injuring his knee. The video cuts out shortly after medical staff attend to him near the hoop.

← Previous: Brent Butt's Comedy Tour Coming to the Burt Next: Winnipeg Named One of 20 Best Places to Visit →
Tags: Basketball | University of Winnipeg