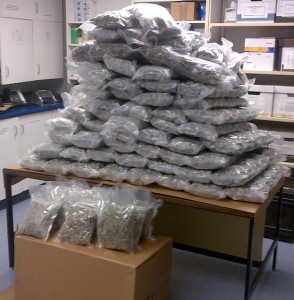 Police seized a haul of marijuana from a semi-trailer truck in the Steinbach area on January 3, 2014. (RCMP HANDOUT)

A semi-trailer truck hauling marijuana through the Steinbach area was pulled over on January 3, resulting in the arrest of two men.

RCMP say the truck was destined for eastern Canada when officers seized approximately 114 pounds of marijuana.

John Millen, 48, of British Columbia, and John Shannon, 51, of Alberta, are both charged with possession for the purposes of trafficking marijuana.

They appeared in Winnipeg court on Monday.