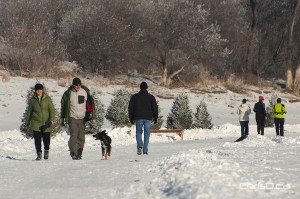 People enjoy a walk on the river trail at The Forks. (TED GRANT / CHRISD.CA FILE)

The Red River Mutual Trail at The Forks will open for the season on Friday.

Officials will hold a 9:30 a.m. news conference to signal the opening of the popular trail, which sees thousands of skaters and walkers each year.

In 2008, the trail broke the Guinness World Record for the longest naturally frozen skating trail in the world at 8.54 kilometres.

The river hasn’t been safe up until now due to open areas of water, which were visible near where The Forks usually builds a hockey rink in its Historic Port.

Eventually, warming huts will also make their way down to the trail. Teams of architects have been constructing their designs as part of the annual international competition. The structures keep winter revellers sheltered from the winter elements and act as a visual focal point for those enjoying outdoor activities along the trail.