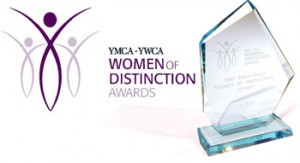 The nomination period for the annual YMCA-YWCA Women of Distinction Awards has opened.

The awards will be handed out May 7 at the RBC Convention Centre and honour women who have inspired others through their creativity, leadership, compassion and dedication.

Awards will be given out in 13 categories. The early bird deadline for nominations is February 14, but nominations will close February 21 at 10:30 p.m.

Nomination forms can be downloaded from the YMCA-YWCA website or picked up at any Y Winnipeg branch.