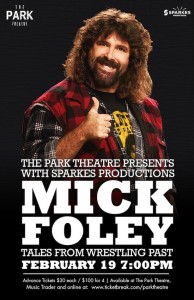 A retired WWE wrestler known for his multiple quirky personalities is still making fans laugh with his antics.

Mick Foley is bringing his comedy show to Winnipeg on Wednesday, February 19 when he performs at the Park Theatre.

The 2013 WWE Hall of Fame inductee, 48, is best known as his characters Mankind, Cactus Jack and Dude Love. He retired from the sport last August.

Besides being a comedian and former wrangler in the squared circle, Foley is also a New York Times best-selling author.