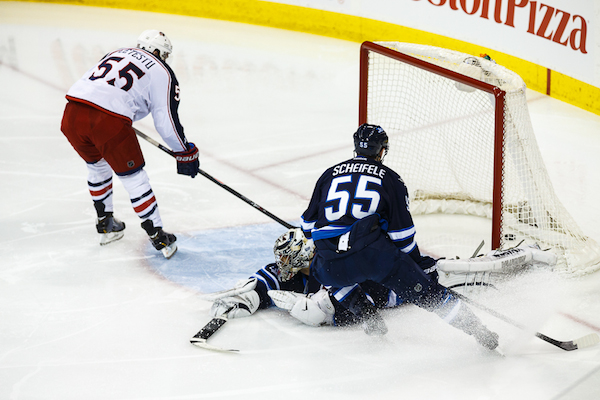 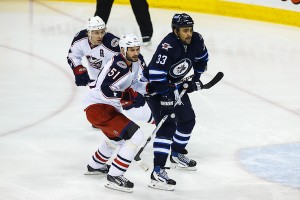 WINNIPEG — For some Winnipeg Jets players, the team’s current losing streak could be as bad a situation as they have ever experienced as professionals, with the Jets dropping their fifth-consecutive game on Saturday night, 6-3 to the Columbus Blue Jackets.

“There’s always tough stretches where you think you feel… things aren’t going the right way. Or you can’t seem to find a way to get things going the right direction,” Jets captain Andrew Ladd summarized after the loss, in what may be a perfectly succinct analysis of his team’s current struggles. “The tough part about that is you’ve got to stay positive. There’s not a lot of positive things going on, but the only way we’re getting out of this is sticking together.”

“You go through ups and downs. I don’t think anything kind of like this,” said Jets defenceman Zach Bogosian of past struggles since joining the National Hockey League in 2008 in comparison to now. “We didn’t really compete all that hard tonight. We didn’t really work all that hard.”

“It’s definitely magnified when you’re in Winnipeg,” said Bryan Little of his team’s recent lack of success. Little was one of the Jets’ lone bright spots with an assist and a goal that snapped his own personal 11-game goalless drought. “I’ve had some tough times in Atlanta where no one seems to care. I mean, no one is asking you questions. It’s not in the papers, and people aren’t in the room after the games. So it’s definitely more pressure right now to get out of this.”

Winnipeg jumped out to an early lead as AHL call-up Eric O’Dell opened the scoring with his first-career NHL goal 4:32 into the game.

But the second period was a different story as Columbus rattled off four goals in an 8:36 span. The onslaught began with a Mark Letestu shorthanded goal just 36-seconds into the middle frame and wrapped with a Boone Jenner penalty shot marker after Jets defenceman Adam Pardy tackled him on a breakaway. Jenner’s first of two goals on the night proved to be the eventual game-winner.

“It seems whenever we get scored on everyone kind of hits the panic button a little bit,” added Bogosian when asked about the team’s current confidence level and fragility. “I thought we left (goaltender Ondrej Pavelec) out to dry quite a few times. He’s done so well for us over the last few years. We left him out to dry — that’s very obvious. It’s just disappointing.”

The 19-23-5 Jets — sunken firmly in last place in the powerhouse Central Division — continue to search for their first victory of 2014 when they host the NHL franchise that left Winnipeg in 1996, the Phoenix Coyotes, on Monday night.