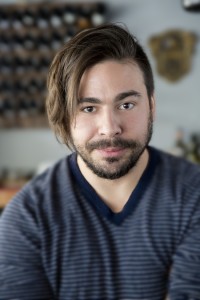 Chef Mandel Hitzer will sleep outside in the Raw: Almond pop-up restaurant for three weeks. (HANDOUT)

A Winnipeg chef, who is bringing back the pop-up restaurant on the Assiniboine River for a second year, also plans to sleep inside for its three-week run.

Mandel Hitzer of deer + almond will sleep out on the ice of Raw: Almond from January 24 to February 13. Hitzer, along with architect Joe Kalturnyk, have nearly sold out of tickets for seatings in their unique culinary concept.

Hitzer won’t be camping out for nothing, though. He plans on raising money for three community organizations through the Great Canadian Sleepout. Donations will be collected to benefit the Boys and Girls Clubs of Winnipeg, FortWhyte Alive, and the Resource Centre for Manitobans Who Are Deaf-Blind.

Mountain Equipment Co-op will provide the gear to keep Hitzer warm and hunkered down in the temporary ice restaurant. The Forks will also be ramping up security to ensure he’s safe.

Donations can be made at Raw: Almond, The Forks, or via PayPal at TheForks.com.