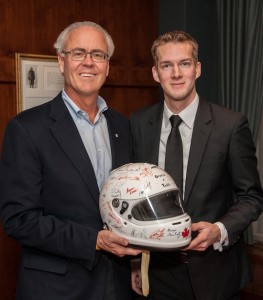 A professional race car driver has received the backing of local prominent business leaders to invest in his racing career.

David Richert has the goal of competing in world class racing championships like Formula 1 and IndyCar one day. To reach this level of success, it takes either a lucrative sponsorship deal or funding from another source.

The Manitoba native convinced Hartley Richardson, Michael Silver, Don Streuber and Paul Thiessen to buy into his creative approach of buying shares in Richert Racing, and furthering his racing career.

“I like to invest in good people and I am impressed with the plan that David has put together,” Richardson, the founder, president and CEO of James Richardson & Sons, Ltd. said. “It’s a unique business concept so I am excited to be an investor and help to give David the opportunity of making this venture a success.”

Richert Racing is aiming towards the goal of $500,000 in capital, combined with corporate partnership dollars to jump-start David’s final push into reaching the highest levels of the sport.

Richert, a business school graduate with honors, grew up just outside of Niverville and has been building the business side of his racing company for nearly a decade. Richert Racing will begin announcing corporate partners and race plans for the 2014 race season in the coming weeks.