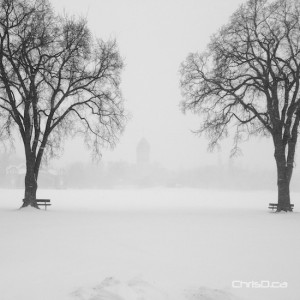 Snow blows across the field at Assiniboine Park on Wednesday, January 15, 2014. (CHRISD.CA)

As southern Manitoba gets walloped by another round of winter weather, the City of Winnipeg has a fleet of snow-clearing machines on regional streets trying to stay ahead of the system.

Jim Berezowsky, the city’s manager of street maintenance, says truck plowing began at 10 a.m. Wednesday and sanding operations will continue tonight. Should the wind increase and temperatures drop, the city will utilize graders as well.

The city is monitoring conditions on residential streets and spreading sand where it’s required. Depending on the amount of snow the city receives, combined with wind, the city may plow residential areas at a later time.

Berezowsky said a snow route parking ban will go into effect at midnight tonight, preventing vehicles to park on any street designated as a snow route between 12 a.m. and 7 a.m. Vehicles found to be in violation of the ban could be ticketed $100 and towed.

The city will also close three cemeteries — Transcona, St. Vital and Brookside — due to snow and blowing snow at 4:30 p.m.

Winnipeg’s James Armstrong Richardson International Airport is experiencing weather related delays on arrivals and departures this afternoon. The airport advises travellers and those coming to pick up passengers to check with their airline, or to check WAA.ca for updated information on their flight status. The poor weather also forced four planes destined for Winnipeg to land in Brandon to wait out the storm.

Students and staff at Red River College’s Notre Dame and Princess Street campuses have been advised to leave at 5 p.m. The college is also cancelling evening classes and events due to the weather. RRC’s Steinbach Regional Campus has also closed and students attending classes at our other regional campuses are encouraged to contact them directly.