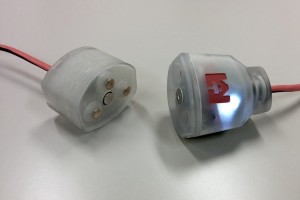 Two Canadian engineers have come up with a foolproof extension cord connector to make life a little easier for chilly commuters.

Called the MagnoPlug, it promises to put an end to ripped power cords when you forget to unplug your vehicle before pulling away.

Arash Janfada, a civil engineer from Saskatoon, came up with the idea after damaging the front of his car by driving away with it still plugged into the block heater.

“I went online to buy the thing that would make that stop. Then I realized that thing didn’t exist,” Janfada said. That’s where the journey began.”

With the help of co-inventor William Topping, the two have developed the product two years later and are currently seeking backers to mass produce it and bring it to market.

The MagnoPlug uses magnets to connect a car’s block heater cord with an outlet and releases easily when pulled. It can also withstand temperatures of -80°C.

“We’re talking about putting this on emergency vehicles like ambulances and fire trucks, which need to be plugged in and recharged at the stations, yet also need to be able to disconnect quickly whenever there’s a big emergency,” Topping said.

Plans for future renditions of the MagnoPlug include Bluetooth connectivity for mobile control, as well as a compact, low-profile design for multiple household and industrial uses.

The project has until Friday to reach its fundraising goal of $100,000 on the Kickstarter website.

← Previous: CONTEST: Win Advance Passes to ‘I, Frankenstein’ Next: Prince Charles and Camilla to Visit Manitoba in May →
Tags: Canada