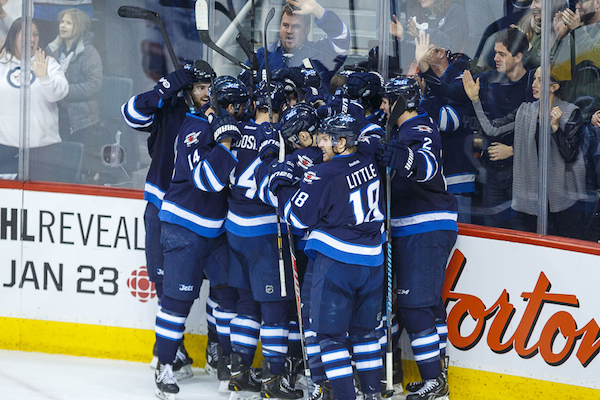 The Winnipeg Jets celebrate their overtime victory against the Edmonton Oilers at MTS Centre on Saturday, January 18, 2014. (SHAWN COATES / CHRISD.CA) 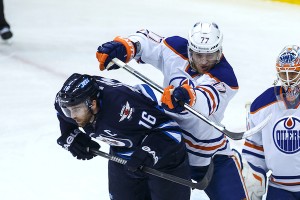 WINNIPEG — The Winnipeg Jets leaned on their dynamic rookie duo Saturday afternoon as they tapped the Edmonton Oilers 3-2 in overtime at MTS Centre.

19-year-old defenceman Jacob Trouba finished with a pair of goals, including the OT-winner just 1:10 into extra time to keep new Jets head coach Paul Maurice a perfect 3-0 since taking over the club just six days ago.

“I’ve been here for a week. I showed up the first day, and (Mark Scheifele and Trouba) looked like good players,” said Maurice in a brief post-game presser. “And nothing’s changed my mind. They’re good players. They have good instincts. I liked the way Scheifele scored the goal. I think he probably took two hits before… he perseveres and stays on it. And I think with Jacob Trouba, he’s going to continually refine that game where you won’t see him jumping in every time, but he will jump in at the right time.”

Scheifele’s goal — his first at home this season — moves the 20-year-old into a tie with New York Rangers forward Chris Kreider for third in NHL rookie scoring with 27 points (9G, 18A).

“It was pretty cool tonight,” said Scheifele of his first marker at MTS Centre since becoming a full-time NHLer. “Obviously Jacob getting two really, really big goals, and he had an unbelievable game. I think it’s just a matter of we want to win, and that’s the main thing. We want to be part of a winning team and we just want to do whatever it takes to win, and I think tonight was a full team effort for sure.”

“My dad was here,” said Trouba after his most productive game as a pro. “He’s staying for a little while, so it’s good to see him and good to play well in front of him.”

“These guys are going to be — I was telling (Scheifele) the other day on the bench, he’s flying out there and he’s got a lot of confidence going and I’m just trying to keep building him up and letting him know that he’s going to be the man here soon enough,” said Blake Wheeler, who set up Scheifele’s goal as well as Trouba’s OT-winner. “Real soon, Scheifs and Troubs (Scheifele and Trouba) are going to be the guys with the reigns on this team. They’re just a couple young kids that have a special ability. They do things out there that not everyone can do, and to have them on your side is extremely exciting for the present, but also for the future.”

Some very tough tests lie ahead for the 22-23-5 Jets, as they head out to California for a pair of dates with the 36-9-5 Anaheim Ducks and 31-12-6 San Jose Sharks on Tuesday and Thursday night.