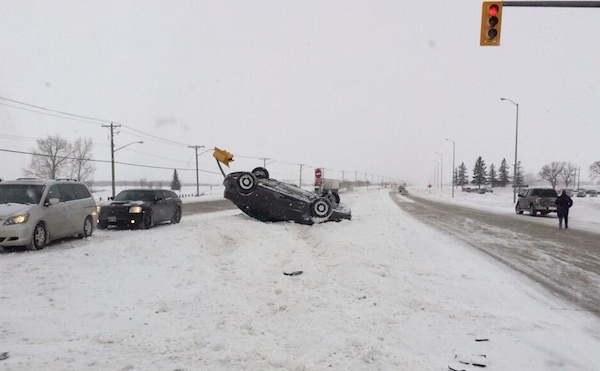 Light snowfall combined with wind has made for treacherous driving on highways around Winnipeg.

Manitoba Infrastructure and Transportation is reporting partly ice-covered conditions and drifting snow on Highway 1 west of Winnipeg to Brandon. Heading east, the Trans-Canada Highway is said to be partly snow-covered with drifting and swirling snow towards the Whiteshell area near Falcon Lake.

Inside city limits, many major roads are ice-covered, resulting in a number of minor accidents.

Icy roads are also believed to be a factor in a crash that caused a car to flip over in Headingley Tuesday afternoon near John Blumberg Golf Course.

RCMP advise motorists to adjust their speed to the road conditions and leave additional space between vehicles in front of you.

UPDATE: Environment Canada has issued wind chill and blowing snow warnings for Winnipeg and surrounding areas. Visibility will be reduced Tuesday evening and into Wednesday with temperatures overnight feeling like between -40°C and -45°C.