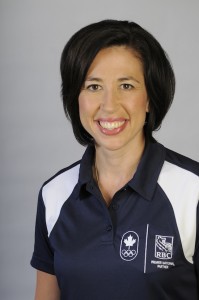 Hometown curler Jill Officer will be greeted with a warm send-off to the Sochi Winter Olympic Games on Saturday.

A member of Team Jennifer Jones, Officer will be representing Canada in women’s curling in February.

The Manitoba Sports Hall of Fame will host the send-off party at 145 Pacific Avenue from 1:30 p.m. to 4 p.m. The public is invited for a meet and greet, autograph and photo opportunity with Officer. Guests will also enjoy a sneak peek of the Manitoba Sport Hall of Fame’s new Olympic exhibit which officially opens on January 29.

Officer is in her sixth year with the RBC Olympians program, which hires inspiring, current and retired Olympic and Paralympic athletes as community ambassadors.

“We are thrilled that RBC selected the Manitoba Sports Hall of Fame to host this event,” said Jeff Hnatiuk, president and CEO of Sport Manitoba. “Jill and her team are future Hall of Famers that will represent our province and country well in Sochi this February.”

The team heads to Switzerland on January 30 for training before landing in Sochi on February 4, three days before the opening ceremonies for the Games.