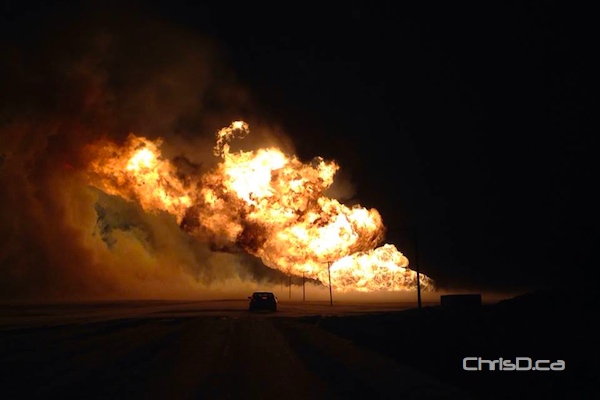 Flames light up the sky after a natural gas explosion near Otterburne, Manitoba on Saturday, January 25, 2014. (SUBMITTED PHOTO)

The blast near Otterburne, Manitoba could be seen from several kilometres away, but no injuries were reported.

RCMP responded to what they called a “loud explosion” at about 1:05 a.m.

Five houses in the vicinity of the blast were evacuated as a precaution.

RCMP say they have been advised that the gas burning is non-toxic.

Officials with TransCanada Corporation and the Transportation Safety Board of Canada are investigating the cause of the explosion along with RCMP and the St-Pierre-Jolys Fire Department. RCMP will also try to determine whether the cause is accidental or criminal.

The pipeline that is affected is one of two that supply the Manitoba Hydro natural gas distribution system in the area. Although only one pipeline was damaged, TransCanada officials have shut off the gas supply to the second pipeline in order to effect repairs to the damaged pipeline. This means TCPL has ceased to supply Manitoba Hydro with natural gas in the RMs of Hanover, Ritchot and De Salaberry.

No estimate for when power and gas will be returned, but Hydro is advising customers to prepare for a gas outage for a minimum of one day.

UPDATE: 3 p.m. — The fire is now out, according to a TransCanada spokesperson.