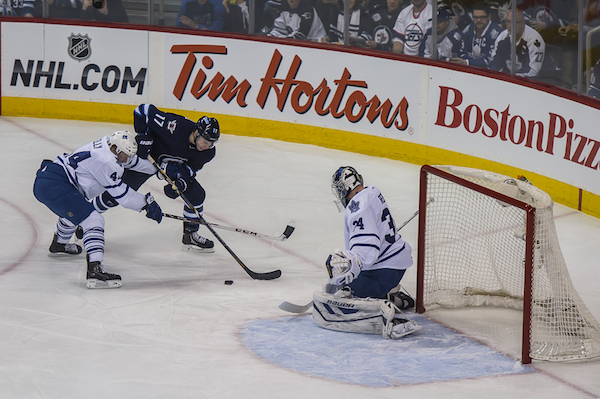 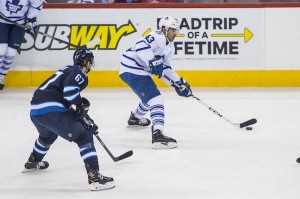 The win puts the 24-24-5 Jets back on track after dropping their first game under head coach Paul Maurice on Thursday down in San Jose — bumping the bench boss’ record since joining Winnipeg to 5-1.

“Between the legs, off the skate, dangle,” joked Byfuglien of what he was thinking when he entered the Toronto zone and fired the game winner past Leafs netminder Jonathan Bernier to the roar of most inside MTS Centre. “No, just simple, shooting, trying to make a play if it’s there. I saw an opening for the net — and just get pucks there.”

Winnipeg had a stranglehold on the boys from the Big Smoke, leading 4-1 midway through regulation, but goals from rare Leaf scorers Troy Bodie (from Portage la Prairie, Manitoba, whose birthday Saturday was likely charmed with his second goal of the season) and Tim Gleason (who notched his first goal since 2011) made it 4-3 headed to the third.

Phil Kessel scored Toronto’s team-leading 27th of the season with just 93-seconds remaining in regulation to send the game to extra time.

“It’s the kind of team that’s dangerous when they’re down,” said Maurice of Toronto’s ability to come back. “Even the tying goal — goals two… through four weren’t necessarily great opportunities. We had bodies back, numbers right.”

“(Goaltender Ondrej Pavelec) needs to know that if he gives up one that he doesn’t like, that the bench isn’t going to fall apart. We’re going to go back and work hard to get it back for him.”

“You don’t like to see a team creep back in the game like they did,” said Jets forward Bryan Little, whose goal and assist up-ticked his team-leading point total to 44. “Overall, we stayed positive and stayed with it. It took longer than 60 minutes, but we got the job done.”

Despite their recent success since changing head coaches, Winnipeg remains in last place in the Central Division. It will be a quick turnover and another tough test for the Jets as their next opponent, the 32-9-12 Chicago Blackhawks, host the Jets on Sunday night.