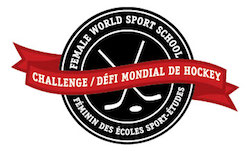 Girls’ prep hockey teams from eight sport schools across the country will be in Winnipeg March 13-16 for the 2014 Female World Sport School Challenge.

St. Mary’s Academy is hosting the second annual tournament at the MTS Iceplex.

This year’s event will bring together teams from St. Mary’s, along with fellow Winnipeg schools Balmoral Hall and Shaftesbury Hockey Academy, Banff Hockey School from Banff, Alberta, the Edge School for Athletes from Calgary, and St. Francis Xavier High School in Edmonton, along with the Pursuit of Excellence Hockey Academy in Kelowna, B.C., and Rothesay Netherwood School from Rothesay, N.B.

“Sport schools are an excellent way for young women to excel both on and off the ice, and this event showcases the talent and potential of these exceptional student-athletes, while giving them a chance to compete against each other at the highest possible level,” said Mandi Duhamel, manager of female development for Hockey Canada.

Players will be on the ice in front of scouts from Canadian Interuniversity Sport (CIS) and National Collegiate Athletic Association (NCAA) post-secondary institutions.