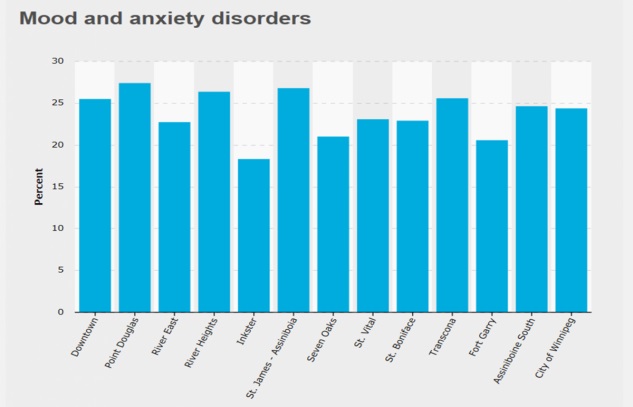 New figures released by Peg, a joint initiative by United Way and the IISD, show that St. James-Assiniboia and Point Douglas are the two regions of the city most impacted by anxiety and mood disorders. (PEG/mypeg.ca)

Almost one in four Winnipeggers suffers from a diagnosed mood or anxiety disorder, according to a community health report.

According to new figures released by Peg, a joint initiative by United Way Winnipeg and the International Institute for Sustainable Development that charts Winnipeg’s overall health, 24.4 per cent of Winnipeggers have been diagnosed with a range of disorders between 2007 and 2012, a number that remains largely unchanged from the previous five-year reporting period of 2002 to 2007.

The St. James – Assiniboia, Point Douglas, Downtown, and Transcona regions of the city all scored above the 25 per cent diagnosis mark, while lower numbers were found in Inkster and Fort Garry. Rates of diagnosis were calculated by Peg using data from visits to doctors, hospital stays, and prescription drug use in people over the age of 10.

According to Peg, mood and anxiety disorders – as part of the larger spectrum of mental health – can be linked to physical health, with people with mental health conditions being at higher risk for chronic pain.