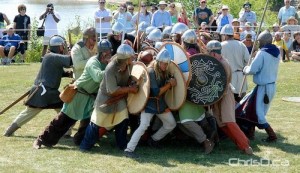 The Icelandic Festival of Manitoba, or Islendingadagurinn, is kicking off its 125th year by celebrating the historic events that sent so many Icelanders west more than a century ago.

“Canadians of Icelandic descent are known as Vestur Íslendingurs (Western Icelanders),” said festival president Cam Arnason. “And it feels appropriate to begin our anniversary year by commemorating why our ancestors came to this country.”

And the reason so many Icelanders can to Canada? The eruption of the Askja volcano in 1875, which caused widespread economic hardship and famine. Over the following decades, about 20 per cent of Iceland’s population emigrated, mostly to Canada and the United States.

To recognize the volcanic eruption, the Government of Iceland and the Icelandic Festival of Manitoba have commissioned a piece of music combining orchestral and electronic elements. The piece — Eighteen Hundred and Seventy Five — will premier this week at the New Music Festival in Winnipeg.

Alexander Mickelthwate of the Winnipeg Symphony Orchestra will direct the world premier
The special events continue on February 15 when the Icelandic Festival hosts its 125th Gala at the Lakeview Resort Hotel in Gimli.  International Icelandic Chef, Friðrik Sigurðsson, will prepare a special menu.
Longtime festival member

Justice Kristjan Stefanson will also be honoured for his dedication to maintaining strong ties between the festival and Iceland. Another highlight of the evening will be a draw for a trip for two to Iceland, sponsored by Icelandair.  Tickets for the Gala and the draw can be purchased at the Icelandic Festival Gift Shop or by calling (204) 642-7417.

More special events are planned throughout the year and will be unveiled shortly.  The 125th Islendingadagurinn will be held in Gimli from August 1st to 4th and will be filled with special anniversary activities in addition to favourite offerings like the MTS All Stream Viking Village, the Alternative Folk Festival and Rides.

Islendingadagurinn is the second oldest continuous ethnic festival in North America. The Icelandic Festival in Manitoba was held in Winnipeg from 1890 until 1931 and then moved to its host community of Gimli in 1932.