Jets Fall to Predators 4-3 at Home 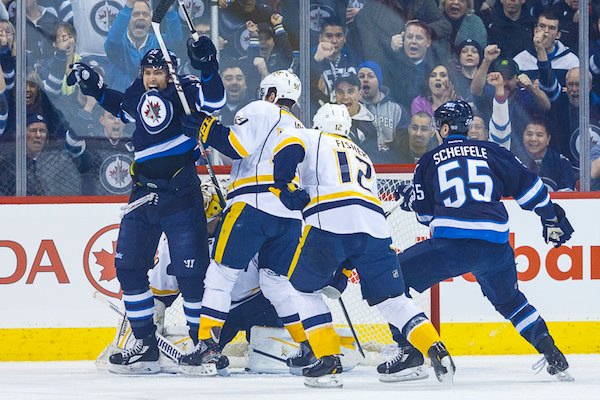 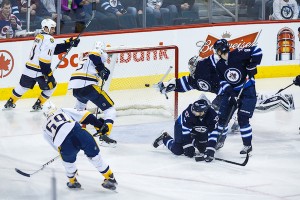 WINNIPEG — Winners of six of their last seven coming in, the Winnipeg Jets suffered a letdown on Tuesday night at the MTS Centre, losing 4-3 to the Nashville Predators.

As a battle between two divisional rivals fighting for points in the Western Conference playoff bubble, as well as a game against a physical Barry Trotz-coached team, the game was truly won and lost along the boards, or “in the trenches” as Jets head coach Paul Maurice dubbed it earlier in the day.

“[Our] group, you could see it in their faces coming to the bench, they gave it absolutely everything they had. There was nothing easy.”

Nashville opened and closed periods well, scoring all their goals in the first or last four minutes of periods. The game-winner came 42 seconds into the third, as Mike Fisher was the beneficiary of a scrum in front of the Winnipeg goal — his punch-in was his 14th goal of the season.

The Predators also got goals from Seth Jones, Nick Spaling and Roman Josi. Winnipeg got an outstanding effort from young gun Mark Scheifele, who scored a goal, assisted on another, posted a +3, and generally was outstanding with the puck in just over 18 minutes of ice time.

“I thought we battled hard in the third and just weren’t able to put one in,” said Scheifele. “It’s a tough division and Nashville plays a hard game. They play good defense, get pucks deep and they play a good game.”

The Jets also got goals from Blake Wheeler, his 22nd, as well as Chris Thorburn’s first of the year. Starting goalie Ondrej Pavelec made 21 saves, while Carter Hutton made 24 for Nashville.

Before fans could get their seats warm, the scoring was off and running. Nashville opened it up with Seth Jones, who fooled Pavelec on a wrap-around at 3:48 to bury his fifth. Just 40 seconds later, Winnipeg had the response, as a Mark Stuart point shot got through a handful of bodies, went off Thorburn’s stick, and into the back of the net to tie the game up. The MTS Centre paid off Thorburn’s first of the year.

“It felt good, but the team lost and you want to contribute to the team’s success in that case. Still, the first of the year feels good,” said Thorburn.

Scoring lulled until the second, when 42 seconds into the period, a marvellous display of Nashville passing (a tic-tac-toe plus one more) ended on the stick of Roman Josi, who beat a thoroughly fooled Pavelec. Late in the second, Nashville pushed the lead to two as Nick Spaling received a pass from the boards to the crease to make it 3-1.

The next three minutes were all Mark Scheifele — he scored at 18:13 on a patient shot that bounced off a Predators body and in. Moments later, he drew the Nashville defense and rifled a pass to Blake Wheeler, who tied the game at 18:40.

After Mike Fisher put his team on top to start the third, the Jets pushed hard for 19 minutes and generated a handful of good scoring chances, but were unable to find the back of the net.

The Jets will now take two days off, play the Canucks at home Friday night, then head out for four on the road starting in Montreal on Sunday afternoon.