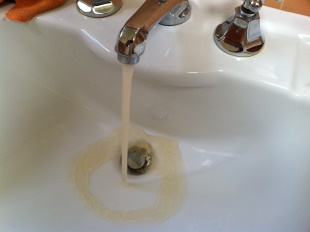 The cause of Winnipeg’s brown water — that has been flowing in sinks and bathtubs across the city on and off since last year — has been attributed to increased levels of manganese.

A report released Thursday details what the city plans to do to improve treatment processes at water treatment plants, including flushing water lines more frequently.

“Our immediate actions include switching to a new water treatment product that contains lower levels of manganese, and fast tracking the schedule of the annual Water Main Cleaning Program to clean all 2,581 kilometers in just two years, compared to the routine program of six years,” said Diane Sacher, director of the city’s Water and Waste Department. “Winnipeggers should expect to see some difference this summer since we’re starting this work immediately.”

Manganese occurs naturally in water taken from rivers and lakes and the levels have risen slightly over the years in Shoal Lake, Winnipeg’s water source.

Sacher said the report outlines a number of short and longer term measures the city can take to reduce the levels of manganese, including using an alternative ferric chloride with a lower concentration of manganese.

“While we expect that it will take approximately two years to implement all the recommendations in the report, our customers should see a gradual reduction in discoloured water as each recommendation is implemented.”