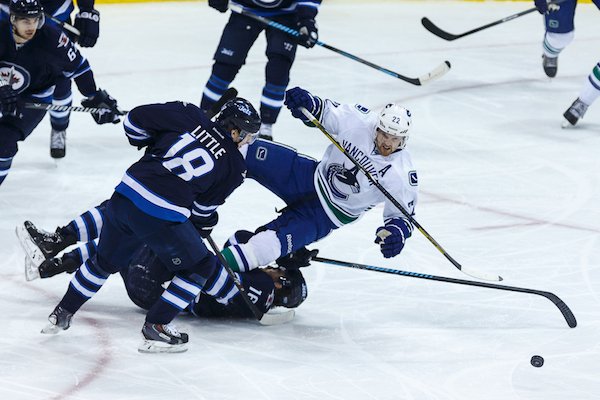 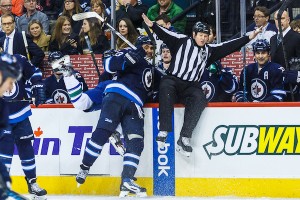 WINNIPEG — With less than three minutes remaining in regulation and the game tied, Winnipeg Jets forward Devin Setoguchi came streaking into the Vancouver Canucks zone and fired home the game-winner, earning the resurgent Jets a 4-3 victory in front of a boisterous Friday night crowd at MTS Centre.

“Mentally, it’s pretty draining. It drains a lot of energy out of you,” said Setoguchi of his recent dry spell that was erased with his two-goal performance. The 27-year-old former 30-goal scorer had gone 26 games with only a single marker, dating back to December 5. “That’s a part of being a pro and trying to get out of it, and hopefully this is a start of something.”

“Really, I’m happy for him,” said Jets head coach Paul Maurice of the pending free agent’s fourth multi-point game of the season. “It’s been a tough stretch of games and you always want to have those players an opportunity to respond for their teammates. And that’s four periods, not just tonight, four periods of an understanding of wanting to play for the guys in the room and really getting it done. So I’m happy for him because that was foremost on his mind, and good for him.”

Winnipeg jumped out to an early 2-0 lead on Zach Bogosian and Setoguchi goals, but Vancouver was able to tie the game twice — initially in the second period with U.S. Olympian Ryan Kesler‘s 19th of the season, and again late in the third with defenceman Jason Garrison‘s 6th.

“They did a good job of getting back in the game, but I like the fact that we stuck with it,” said Jets captain Andrew Ladd. “There’s a confidence with our offence right now that we can push it at times or in games and create chances and goals when needed.”

“Through 30 minutes we had better looks in tonight’s game than any of the games that we’ve played,” added Maurice. “We scored five in a couple other (games), and scored maybe easier, but in terms of quality of chance.”

Maurice improves Winnipeg’s record to 7-2-0 since taking over for Claude Noel on January 12. The 26-25-5 Jets now head out on a four-game road trip to wrap their pre-Olympic break schedule, with dates in Montreal, Carolina, Washington, and St. Louis.

The Jets return to action at MTS Centre on Friday, February 27 against the Phoenix Coyotes.