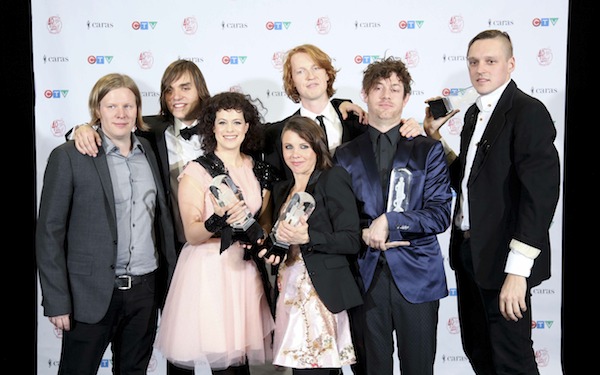 Arcade Fire pose backstage with their trophies at the 2011 Juno Awards Sunday night at the Air Canada Centre in Toronto. (CARAS)

Arcade Fire leads the list of musicians nominated for the 2014 Juno Awards, picking up six nods on Tuesday during a news conference in Toronto.

The awards will be handed out in Winnipeg in March during a week-long celebration of Canadian music and fanfare.

Scheduled to perform at the 43rd Juno Awards are City and Colour, Robin Thicke, Serena Ryder, Tegan and Sara, and Walk Off The Earth.

It’s the second time the Junos have been held in Winnipeg.

Tickets go on sale Friday, February 14 through Ticketmaster. The live broadcast will air on CTV Sunday, March 30 from MTS Centre.