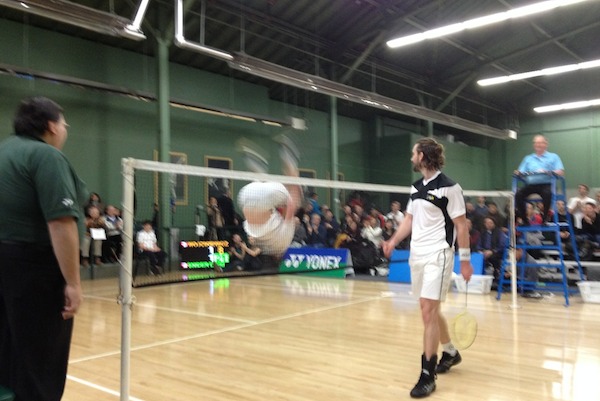 David Snider of Manitoba does a backflip after winning the National Men’s Singles Title in badminton over the weekend in Vancouver. (MANITOBA BADMINTON ASSOCIATION)

The 25-year-old defeated Ottawa’s Stephane Wojcikiewicz 13-21, 21-6 and 21-8 in the final at the National Championships, held at the Vancouver Lawn Tennis and Badminton Club.

Snider took a break from the sport two years ago to focus on getting into med school this fall.

In his first tournament back after two years away from the sport, Snider placed second in the Yonex Prairie Senior Elite held at the Winnipeg Winter Club, a national level tournament held by Badminton Manitoba. Next up he attended the Yonex Toronto Open and was knocked out in the quarter-finals by the eventual men’s singles runner-up.

← Previous: U of W Reaches Tentative Agreement with Faculty Next: CONTEST: Win Advance Passes to ‘3 Days to Kill’ →
Tags: Manitoba