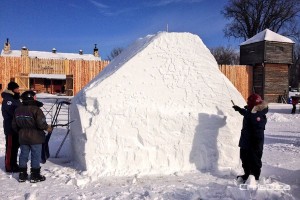 A block of snow is crafted and shaped at Voyageur Park in St. Boniface on Thursday, February 13, 2014. (CHRISD.CA)

You could hear “Hé Ho!” being belted out across St. Boniface on Thursday as Festival du Voyageur offered up a sneak peek of its festivities to mark the 45th year.

The 10-day French-Canadian winter festival is the largest of its kind in Western Canada and officially begins tonight with a torch light walk. The walk on the frozen river, where the Red and Assiniboine meet, will be lit by hundreds of candles and torch lights starting at 6 p.m. It will eventually end up at Voyageur Park — the hub of activities — where an opening ceremony will be held at 7:30 p.m. The park opens to the public at 5 p.m.

“It’s going to warming up a little bit, which is always great, but all the snow and cold is good for us,” said Irina Ivanov Bissonnette, Festival du Voyageur’s director of marketing and communications. “The park is looking great, the snow sculptures are looking great, but hopefully it warms up just a little bit more so people can get outside and enjoy the Festival.”

And warm up it will. Temperatures are expected to rise to the minus single digits by this weekend and into Monday, just in time to celebrate Louis Riel Day. Although, it won’t get warm enough to jeopardize the precious snow sculptures around the city.

World-renowned snow sculptors are putting the finishing touches on their chilly masterpieces as part of the International Snow Sculpting Symposium. Teams have arrived from as far away as the Netherlands, Colombia and Sweden. The sculptures are up at numerous locations around the city, but most of them will be available for central viewing inside Festival’s gates.

Ten-day Voyageur passes are on sale now for $28 (adults), $15 (youth 13-17), and $10 (children 6-12). Daily admission is $15, $10 and $8, respectively, and are available at all Canada Safeway locations or by calling (204) 233-ALLO. Visit HeHo.ca for further information and also download the official smartphone app for a schedule, venue and performer information.