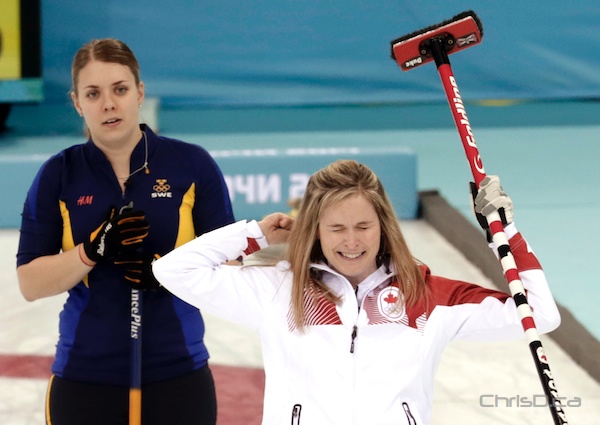 Canada’s Jennifer Jones and teammates are coming back from the Sochi 2014 Winter Olympics as gold medallists.

The Winnipeg-based rink from the St. Vital Curling Club defeated Sweden 6-3 during the women’s curling final on Thursday night (Sochi time) during a nail-biting match.

The Jones rink, made up of lead Dawn McEwen, second Jill Officer and third Kaitlyn Lawes, went into the match 10-0 and played most of the game with a series of blank ends. They finished their time in Sochi with a perfect 11-0 playing record.

Jones sealed her fate in a final spot with a 5-3 win over Great Britain (bronze) Wednesday during a semifinal round.

It’s the second gold for Canada in women’s curling. The late Sandra Schmirler of Saskatchewan won the first during the Nagano Olympics in 1998.

The hometown rink had local support cheering them on, with hundreds gathering in St. Vital to watch the game live during a viewing party.

Upon their return home, Winnipeg Mayor Sam Katz will present Team Jennifer Jones with the city’s Outstanding Achievement Award medallions — an honour bestowed to gold medal Olympic champions based or residing in Winnipeg.

Fans can welcome the gold-medal winning team home on Monday, February 24, when they land at James Richardson International Airport at 10:11 p.m. on Air Canada flight 271.