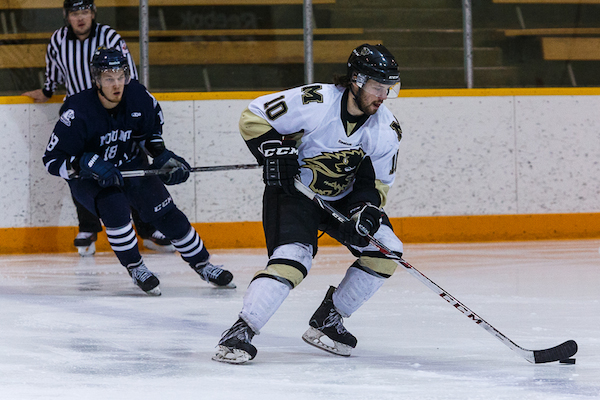 The Cougars took the first game 3-2 in an 85-minute series opener in a best-of-three quarterfinal series at the Wayne Fleming Arena.

Brenden Turnbull lobbed in the game-winning goal at 4:09, while Manitoba’s Jordan DePape and Brendan Rowinski put up goals for the Bisons against Cougars’ goaltender Dalyn Flette.

“We knew they’re a physical, hard-working team but it’s a playoff game, there were a lot of hits on both sides and both teams worked hard,” said Bisons head coach Mike Sirant. “We turned over too many pucks and that didn’t help us.”

It was the first-ever post-season game for the Cougars, who meet the Bisons again on Saturday at 7 p.m. Should the Bisons win, both teams will play at 3 p.m. on Sunday.

← Previous: Folk Festival Teams Up with U of W for Food Catering Next: Local Music Community Pulls in $4.5K for Charity →
Tags: Hockey | Manitoba Bisons | University of Manitoba | Winnipeg