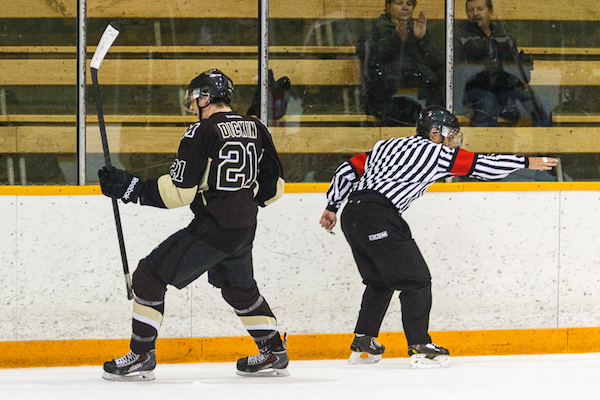 WINNIPEG — The Manitoba Bison men’s hockey team retaliated on Saturday night for a loss dealt to them on Friday at the hands of the Mount Royal Cougars.

The Bisons shot to a 4-2 victory in the second game of a best-of-three Canada West quarterfinal series at the Wayne Fleming Arena.

Manitoba’s win brings them to a third and final game on Sunday to determine who advances in the playoffs after an intense and chippy 60 minutes.

“That was Bisons hockey tonight. We played hard, we did the things we needed to do to win in the playoffs,” said Manitoba head coach Mike Sirant. “We were solid in our defensive zone, we were physical and everybody contributed.”

Manitoba’s goals were delivered by Taylor Dickin (2), Ian Duval and Jesse Paradis. Starting goalie Joe Caliguiri had 22 saves of the game, including an incredible late game save that drew cheers from the hometown crowd in the stands.

“We need goaltending in the playoffs and [Joe’s] certainly contributing for us,” added Sirant. “He made some outstanding saves late in the game to conserve the win.”

Game three is Sunday at 3 p.m.