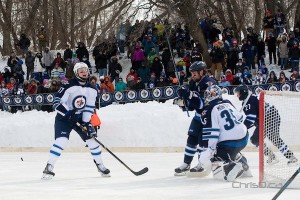 Winnipeg Jets players skate on the Assiniboine River at The Forks during an outdoor practice on Sunday, February 23, 2014. (TED GRANT / CHRISD.CA)

The Winnipeg Jets held their Sunday practice at a much different venue, taking to the frozen Assiniboine River at The Forks in front of approximately 2,500 thrilled hockey fans.

The Jets’ public outdoor practice was held under wind chills hovering around the -28°C mark, but those who came out appeared dressed well for the elements.

“It’s huge. To have people out here in this weather and watch us at practice, it’s pretty cool,” said Jets’ centre Mark Scheifele, who said he was trying to stay on the ice as much as possible to keep warm.

Players and coaching staff skated for about 60 minutes on one of two rinks located in the Historic Port on the river, where many games of shinny are often played.

“It’s cold, but it’s a cool experience,” said defenceman Keaton Ellerby. “You look around and see the people in this city… how much they love the Jets and how much they love hockey to come out and watch us hack the puck around out here. It’s pretty awesome.”

To end the practice, young hockey players from the Portage la Prairie Atom 1 team joined the Jets on the rink. The 10 and 11-year-olds won a contest to share the ice with their NHL heroes.

Winnipeg hosts the Phoenix Coyotes on Thursday, February 27, marking the first game for the team since the Olympic break. Puck drop is 7 p.m. at MTS Centre.