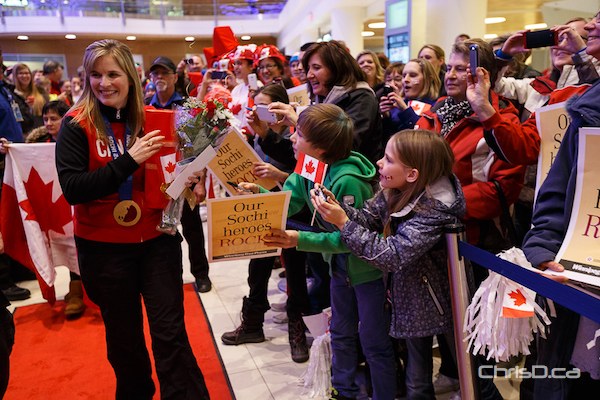 Jennifer Jones is welcomed back by hundreds at the Winnipeg airport as she shows off her Olympic gold medal on Monday, February 24, 2014. (SHAWN COATES / CHRISD.CA) 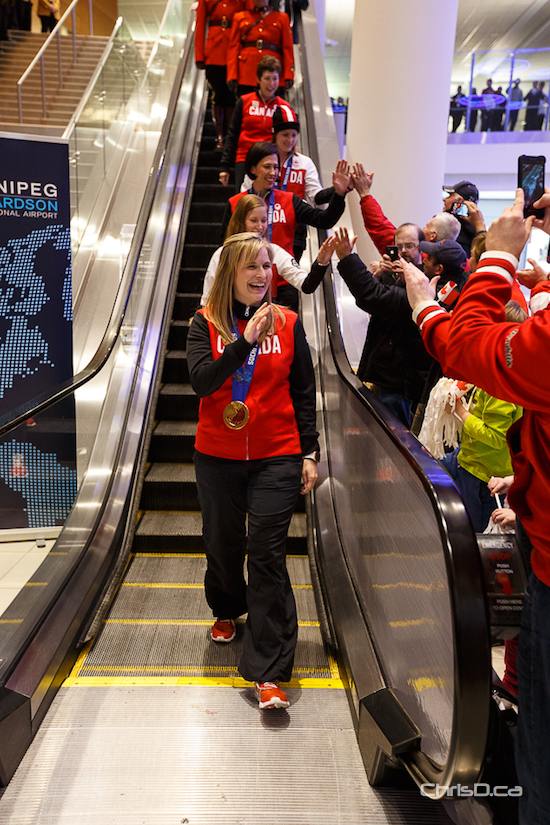 Jennifer Jones and her women’s curling team arrived at James Richardson International Airport shortly after 10 p.m. to a throng of cheers from fans and blinding camera lights of the media waiting to speak with them.

Jones and her rink — second Jill Officer, third Kaitlyn Lawes, lead Dawn McEwen and alternate Kirsten Wall — came down the escalator led by bagpipes and a full Mountie escort with their gold medals worn proudly around their necks.

“It’s so nice to be home and everybody that supported us and shared in this with us. It’s incredible to see so many people here and to come back to Winnipeg,” Jones said upon landing.

“We said that it was because of all of Winnipeg and Canada that we were on top of the podium, because the support we received was absolutely phenomenal and we can’t thank everybody enough.”

The team from the St. Vital Curling Club went undefeated 11-0 at the Sochi 2014 Winter Olympics. Jones defeated Sweden 6-3 last Thursday in her final game to become Canada’s women’s curling champion. They received their medals on Saturday.

“We haven’t slept a lot, so I think sleep will be a priority,” Jones added. “It’s amazing to be home, even though Winnipeg is minus 30-something outside.”

Some of the roughly 300 fans in attendance arrived at 8 p.m. just to secure their spot along the roped off red carpet on the arrivals level of Richardson International. Tim Hortons was even so kind (or Canadian-like) to have special edition gold-inspired donuts baked for the occasion, which fans munched on free of charge while they waited.

“It’s an overwhelming feeling right now,” Officer said. “Through social media we sort of felt the support from home and from across the country. This (airport homecoming) just puts the icing on the cake. This is unbelievable that so many people came out later in the evening to welcome us home and to share in this success.”

Besides the celebrations at the airport, the city and province are in the planning stages to recognize Jones and her teammates on a larger scale. Details on a public ceremony are underway, but haven’t yet been released.