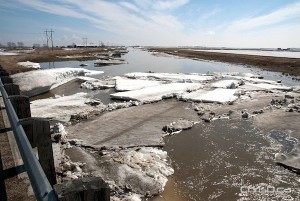 Manitoba has a new chief flood forecaster at the helm.

Dr. Fisaha Unduche replaces Phillip Mutulu, who left the province last year to take a job in Alberta after a short stint as the public face of flood-fighting in Manitoba.

Unduche, 38, is a University of Manitoba graduate of flood modelling and mitigation engineering. His hiring comes from within the province, where he has worked for the past five years as the senior water control systems planning engineer.

The province interviewed seven candidates for the nationally-advertised position, four of which were internal.

Unduche, an immigrant of Ethiopia, has lived in Manitoba since 2004. He said he arrived here after researching parts of the world with the greatest flood risk based on Google searches while determining where to study in his chosen field.

While the province won’t release its complete flood outlook until Friday, Unduche says despite the mass accumulation of snow, he expects a normal to below normal flood risk this season.