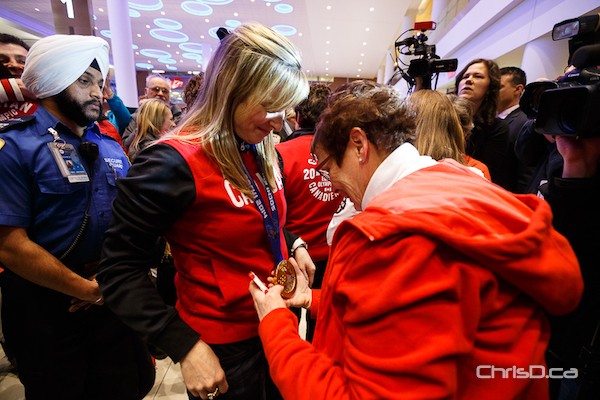 Jennifer Jones shows her gold medal to her mother upon landing back in Winnipeg on Monday, February 24, 2014. (SHAWN COATES / CHRISD.CA)

A Winnipeg street is being renamed to honour the Jennifer Jones curling team, who won gold at the Sochi 2014 Winter Olympics.

Regal Avenue, the street where the St. Vital Curling Club is located, will also be known as Honourary Team Jones Way.

“Winnipeggers have always been extremely supportive of Team Jones and are very proud of the team’s record-breaking Olympic achievement,” said Winnipeg Mayor Sam Katz. “All of the members of the team are ambassadors for Winnipeg and the sport of curling and it is fitting to honour them with Team Jones Way.”

A ceremony to unveil the street name will take place at a later date. The city will also present the team with Outstanding Achievement Award Medallions.