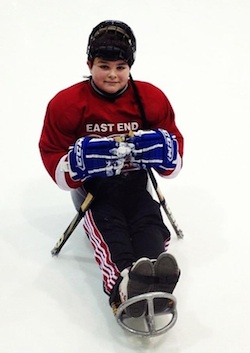 A young Winnipeg athlete with spina bifida is going on the trip of a lifetime to watch the Canadian sledge hockey team compete at the 2014 Paralympic Games in Sochi, Russia.

Spencer Lambert, 12, has a love for sports and discovered sledge hockey at the age of seven when he enrolled in a program created by the Society for Manitobans with Disabilities. The youngster plays at the intermediate level and has begun playing with the adult senior team as well. Besides hockey, he’s also involved with wheelchair tennis, wheelchair basketball and wheelchair rugby.

“It’s getting close now, and he’s getting pretty excited about it,” said his father, Richard Lambert, who is also headed to the Games. “It’s starting to sink in.”

The trip came together through a partnership with the Air Canada Foundation, Canadian Paralympic Committee, and the Shriners Hospital for Children. While in Sochi, Spencer will act as an ambassador for para-sports.

The Paralympic Games are being held from March 7 to 16.