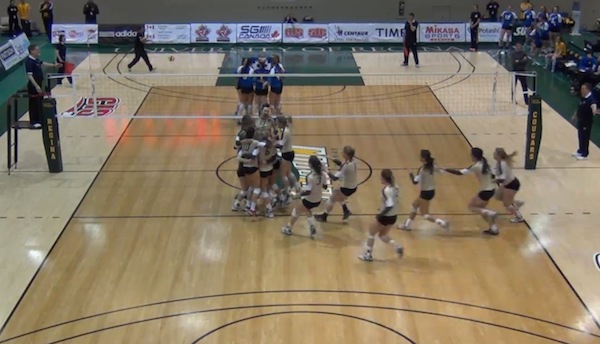 The U of M Bison women’s volleyball team celebrates winning the CIS national championship in Regina against UBC on Sunday, March 2, 2014. (CIS-SIC.TV)

The Manitoba Bisons are national volleyball champions after the women’s team defeated the UBC Thunderbirds on Sunday.

“We passed very well and Caleigh (Dobie) played very well as our overall defence was amazing and our passing was there. We were able to attack different zones and not get UBC on a roll,” Bison head coach Ken Bentley said.

The win is the seventh CIS championship in the Bisons’ history since the 2001-02 season.

“It’s like the song ‘feels like the first time’ and we have been so close for some many years. It feels really good to be healthy and be able to get another shot at a CIS championship as it is so hard to win now and really proud of the whole team effort.”

Manitoba’s Rachel Cockrell was named the championship MVP after registering a match-high 18 kills on 34 attempts in the final with just one error for a .500 hitting percentage. Cockrell was also in on five blocks for the Bisons.

The Bisons also snapped an 18-game match streak against UBC dating back to the 2007-08 season.