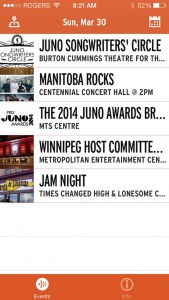 A screengrab of the new Manitoba Live music app. (CHRISD.CA)

Manitoba Live helps concert-goers find shows in venues and clubs in Winnipeg and throughout Manitoba. It includes concert and festival listings, and users can sort live music events by venue, date and artist, while using the search function to see which shows are happening near their given location.

“This mobile phone app sets a new standard that we believe will get the attention of music industry associations across the continent,” said Sara Stasiuk, executive director of Manitoba Music and co-chair of the Year of Music organizing committee.  “This app says it loud and proud that in Manitoba, we speak music.”