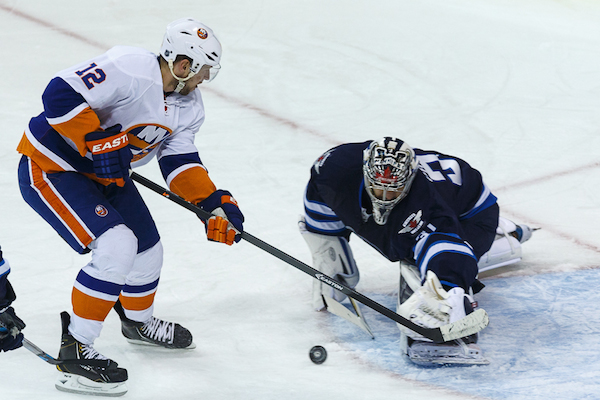 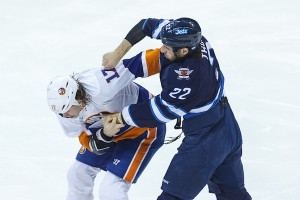 WINNIPEG — On the eve of the NHL trade deadline, amidst widespread speculation, phone calls, texts, tweets, and rumours, the suddenly contending Winnipeg Jets tried to keep their eyes on the prize Tuesday night as they hosted the struggling New York Islanders at MTS Centre.

And while a full two points were desired by the Jets — and they were able to work to force overtime with a late equalizer — they ultimately fell 3-2, clinched on a breakaway goal by lightning-quick 26-year-old Austrian winger Michael Grabner.

For the third time in four games Winnipeg (30-26-7) went into extra time. And for the second time over the same span, the playoff-chasing Jets escape with a single point. The 24-32-8 Islanders grabbed only their third victory in their last 12 games. Winnipeg, now 11-3-2 under new head coach Paul Maurice, sits in a virtual tie with Phoenix at 67 points, just under the wild card playoff line.

“I think we understand there’s no easy games in this league,” said Jets captain Andrew Ladd following his second two-goal night of the season. “For our group, I thought we were a little tight from the first period especially. By the time we got a little looser and playing we were down 2-1. I thought we did a good job battling back to get into overtime, and at that point it can go either way.”

“They were making plays out there and we were a little bit tighter,” echoed defenceman Mark Stuart. “(The single point) is huge. We’ve got to grab points whenever we can. Of course we want two, but to grab one is really big for us, and now we concentrate on Thursday and grabbing two there.”

The Jets host the 35-22-6 Los Angeles Kings on Thursday night in an early 6 p.m. start at MTS Centre.

In the second period rookie centreman Mark Scheifele suffered what appeared to be a knee injury after taking a hit into the boards. He left the game and did not return.

“We’ll have Mark tested tomorrow (Wednesday) morning and get a real good understanding of what we’re dealing with,” said Paul Maurice after the game. “I’m not going to speculate on what we think in terms of the length of this. We’ll know everything we need to know by the morning — I think by the time we meet tomorrow.”

“If he goes in and it’s all clean and everything’s good then there’s a chance (he’ll play Thursday). But I… the spectrum is there now with what we think.”