CTF: Province’s Debt is $30B and Rising 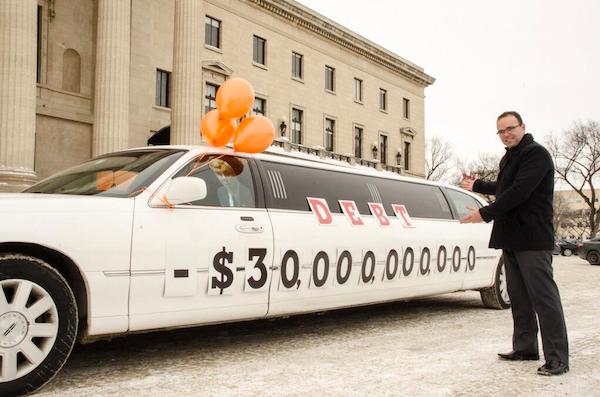 Colin Craig of the Canadian Taxpayers Federation shows off a limousine draped in the province’s running debt in front of the Manitoba Legislative Building on Wednesday, March 5, 2014. (TWITTER)

Ninety minutes after the Manitoba government announced $5.5 billion in infrastructure spending, the Canadian Taxpayers Federation “celebrated” that the province is actually $30 billion in debt.

The CTF rented a white limousine and parked it in front of the Manitoba legislature draped with giant numbers of “-$30,000,000,000” stretched across the side of it. They also used a giant novelty cheque to the government courtesy of “Children of Manitoba.”

“This isn’t the kind of achievement that the Selinger government should be proud of,” said CTF Prairie director Colin Craig. “With baby boomers retiring en masse things are only going to get more challenging for governments. Here in Manitoba the government hasn’t saved a penny to deal with that situation, but yet it’s off building football stadiums and avoiding tough decisions.”

The CTF says the province’s debt is currently increasing by $6.78 million per day or about $78 per second.

Manitobans will see where else their money will be going when the government releases the provincial budget on Thursday.