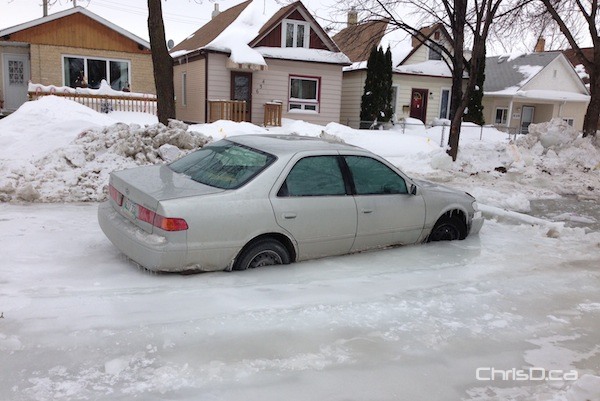 A vehicle sits frozen in several feet of ice after a water main break on St. John’s Avenue. (CHRISD.CA) 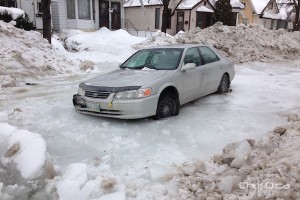 A vehicle that sits frozen in time, err, in ice is the responsibility of the owner to determine how it’s going to be freed.

The Toyota Camry has been sitting in the middle of the 600 block of St. John’s Avenue ever since a water main break last Friday.

Water flooded the area, leaving the vehicle stranded and eventually frozen in several feet of ice. City crews have plowed both ends of the north end street leading up to the sedan, but haven’t attempted to remove it.

“The registered owner of the vehicle has been contacted and the city has requested they remove the vehicle as soon as possible,” said City of Winnipeg spokesperson Lisa Fraser. “Upon removal of the vehicle, clean up will proceed.”

Fraser also said the costs associated with removing the car, such as using a steamer or another method, would be resolved in due course over who foots the bill.