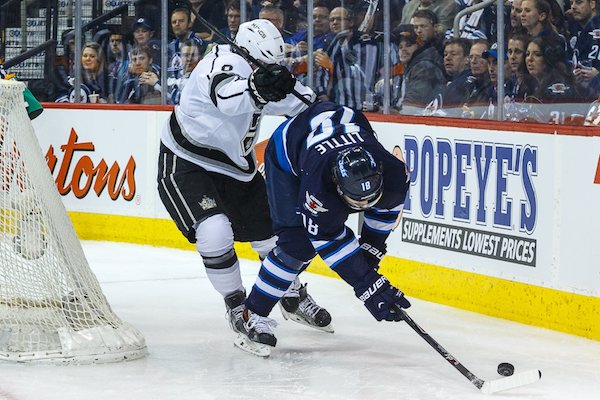 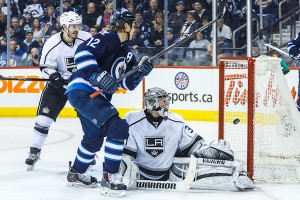 WINNIPEG — The Winnipeg Jets may be well over .500 since head coach Paul Maurice took over in early January, and they may have entered Thursday night with points earned in every game since the Olympic break. But as the emerging club edges themselves into the conversation as a post-season hockey team for the first time since the spring of 2007, they again showed how they still have some growing to do.

The visiting Los Angeles Kings entered MTS Centre with five-straight wins under their belts, and made it six with a decisive 3-1 victory over the Winnipeg Jets.

“I think we ran into the L.A. Kings at their best,” said the head coach following his team’s first regulation loss since February 6. “There’ll be nothing about today’s game that would say we should (generate offence). But it’s a dangerous thing to evaluate your offensive game against that team every night with the way they’re going now.”

The Kings wildly outshot the Jets 41-18, largely in part to the four power plays Winnipeg surrendered.

“They had a good power play. They move the puck well,” said Jets goaltender Ondrej Pavelec, who stopped 38 pucks in his seventh-consecutive start. “They can spend a lot of time in your zone, and (we) just had trouble to handle it… We have too forget about this one and focus for the next one.”

The Kings play a decisively defensive style under head coach Darryl Sutter. They have outscored opponents 18-8 during their current six-game streak.

“They play a simple, hard game,” said Winnipeg rookie defenceman Jacob Trouba, who finished second in his team’s total ice time next to Zach Bogosian, including 4:34 on the penalty-kill of the 7:55 total man-advantage time relished by the Kings. “They stick to their game plan and wait for you to mess up and make a mistake. And they’re good at capitalizing on it. They’re a tough team to play against, but that’s a game we can play and a game that we like to be in.”

“I think we lost the special teams battle, and it’s hard to win when you lose that battle.”

The Jets wrap their current home stand with a matinée matchup with the Ottawa Senators on Saturday at 2 p.m.