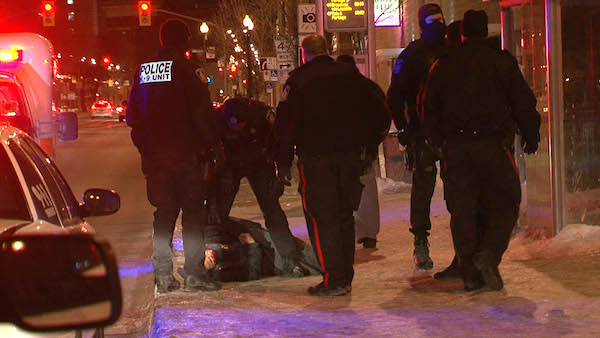 Winnipeg police tend to a man assaulted in the 600 block of Main Street on February 28, 2014. (SHAUN MCLEOD PHOTO)

Five people have been arrested in connection to a severe beating outside a Main Street hotel on February 28.

Winnipeg police say at around 1:30 a.m., a 42-year-old man stepped outside of a hotel in the 600 block of Main Street to have a cigarette.

A group approached him and began punching and kicking the man to the ground. He walked a short distance and was again assaulted by two of the same people in the group. During the assault, he was robbed of cash and cigarettes before the suspects fled the area.

With the help of a passing motorist, police were called and the victim was taken to hospital in critical condition.

Police have since arrested Shawna Sumner, 35, Angela Mousseau, 30, Warren Redhead, 33, Valentine Sumner, 35, and a 24-year-old woman released on a promise to appear. They all face charges of aggravated assault and/or robbery.